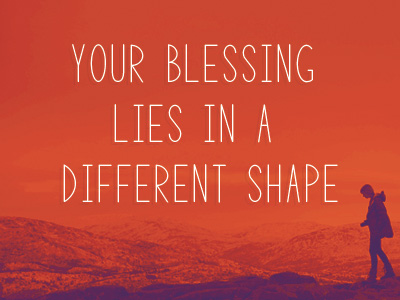 Your blessing from God lies in a different shape. The time has come when you begin to enjoy your blessings. This will soon become your testimony will be that.

In the shape of disappointment, lay great joy

Abraham’s great blessing was Isaac. But for years, it lay in the form of disappointment.  During those years, did Abraham have a promise from God? Yes. But had he seen it fulfilled? No. The only thing he saw then, was the disappointment of unfulfilled blessing.  Abraham didn’t know that Isaac — ‘laughter’ — lay behind the disappointment. He didn’t know, but God revealed it that at the right time.  in the midst of your disappointment, say that your blessing is on its way. Confess that and it will happen. Your Isaac is going to be revealed. The time for fulfilment of your blessings and promises is at hand, says God to his church.

In the shape of trouble, lay springs of water

If you were to ask Isaac, he’d say that his springs were in the shape of trouble. Wherever he went to dig and claim wells that were his inheritance, people contested and quarrelled with him. There might be people who have contested with you.Forgive them, for God has kept a Rehoboth for you just like he did for Isaac! See with eyes of faith, the wells that God has kept for you in the shape of trouble. Forces that are contrary to you will be cancelled in Jesus’ name. If God is for you who can be against you! Take strength in God.

In the shape of deception lay the strongest flocks

In Jacob’s life, the strongest flocks lay in the shape of deception. He was deceived by his father-in-law Laban. But despite that, ultimately Jacob got the strongest flocks in the land.  Even in the midst of deceptions, realise that the best for you lies within it, in a different shape. Your family, society or business partners, may try to cheat you. But if you call Jesus Lord and depend on him, God will reveal the best that he has kept aside for you. The best for you, which lies in that unattractive shape of deception!

In the shape of rejection, lay great honour

For David, great honour and position lay hidden in the shape of the rejection he faced. When the prophet Samuel came home, David’s father called all his sons, except David. But God saw David, in kingly anointing. It is because of this that David sang in Ps 27.10 “When my father and my mother forsake me, then the LORD will take me up.”No matter who forsakes you, God will not.

We become sad and discouraged when faced with rejection. Discouragement is the gap between expectation and reality — when you expect something, and then face rejection in reality. Perhaps things didn’t happen at the time you wanted, in the way you wanted. May there be a reversal and a promotion, and you reach where you should reach. Put your discouragements in God’s hands and look to him and pray. God will exalt you.  Do not be discouraged, but commit everything into Jesus’ hands. Also be disciplined. No one has it all at the first try. In fact people fail themselves into success. Like Peter who toiled all night and caught no fish, a huge harvest awaits if you let Jesus enter your boat and obey His word.

In the shape of disappointment lay great blessing

Bitter disappointment marked Naomi’s life. She went through experiences of bitterness as she first lost her husband, then her two sons. She was left with just her daughters-in-law, and no generations.  But when Naomi and her daughter-in-law Ruth came to their kinsman Boaz’s field, God’s hand began to move for them. So much so that when a child was born to Ruth, the women of the land said Naomi has a child!  Ruth 4.16,17: And Naomi took the child, and laid it in her bosom, and became nurse unto it. And the women her neighbours gave it a name, saying, There is a son born to Naomi; and they called his name Obed: he is the father of Jesse, the father of David. God has kept a blessing within the bitter experiences, like for Naomi. Keep looking to Jesus.

In the shape of a sinner, lay a saint

The first time that Peter met Jesus, he fell down on his knees and said “Depart from me; for I am a sinful man, O Lord” (Luk 5.8). But Jesus knew there was an apostle within the sinner.  To those who have fallen in defeat, God says there is a call upon your life, therefore commit your life to Jesus. Don’t look to your sinful nature but to Christ who is your righteousness. Be covered by His blood that gives you victory and go forward.

In the shape of a demon-possessed man, lay an evangelist

In Mark 5, we meet a demon-possessed man who had 6,000 demons in him. But within him, Jesus saw an evangelist. Once he was delivered, “he departed, and began to publish in Decapolis how great things Jesus had done for him: and all men did marvel” (Mark 5.20). In these days God will raise up not just people who have been to Bible college or a seminary, but those who are within the snare of the devil. If with a single word Jesus made 6,000 demons flee, he can deliver you too, no matter how great your bondage. Call upon Jesus and he will deliver you, and make you an evangelist to many towns.

In the shape of a prison experience, lay prime ministership

Within the young Joseph, there was a Prime Minister. As he went through the experiences of being abandoned by his brothers, wrongful accusation in Potiphar’s house and through prison, God knew there was a prime minister inside of him.

In the shape of a worm, lay beauty

The caterpillar eventually turns into a butterfly but It has to go through the pupa stage, where it struggles to come out. If the pupa is cut open to help the creature come out, what emerges will not be a butterfly but a worm. It is the pressure that forms the wings of a butterfly and releases beautiful colours. Your perseverance will not be in vain: wings are sprouting, colours are emerging through your struggle.  The ‘worm’ Jacob is turned into a mighty threshing instrument by God. Isa 41. 14,15: Fear not, thou worm Jacob, and ye men of Israel; I will help thee, saith the Lord, and thy redeemer, the Holy One of Israel. Behold, I will make thee a new sharp threshing instrument having teeth: thou shalt thresh the mountains, and beat them small, and shalt make the hills as chaff. if you pray and worship, in the midst of the pressure and difficulty, God will create beauty in you.

What do you need to do?

If your blessing lies in a different shape, what do you need to do for the shape to change? You need to pray. It is a call to prayer for the next year, an exhortation to fast and pray. Not just to hear a good message and go, but to travail in prayer personally, in your family and in church.

Only when you pray do you draw close to God. Jam 4.8: Draw nigh to God, and he will draw nigh to you.

Benson Idahosa, was an African pastor, the father of pentecostal movement in the continent. At the age of 17, he was touched by a Bible verse that said Jesus resurrected the dead. He was extremely joyful. Claiming the word, he took his Bible and went looking for a place where death had occurred. He finally found a dead child being taken to be buried, 12 km away. Great joy rose inside him. He went over and read out the Bible verse that spoke of Jesus raising Lazarus from the dead. He prayed in Jesus name and the child rose from the dead! A mighty miracle, all because he believed.

As you draw closer, you will understand his words and his greatness, in a deeper way. A great confidence comes within you.

When you pray, you’ll walk in the supernatural. Your blessing will be revealed from within its different shape. Supernatural implies something that is superior than natural. You move from natural to supernatural as you pray. In Mark 6, after praying, we see Jesus walking on water. When you to pray, you can walk over any wave or water situation.

When Peter told Jesus that they had to pay tax, Jesus asked Peter to go fish. He knew how to cast a net, but not to fish using a single bait. Similarly, some people believe in casting a wide net and going after many things. But God says, focus on one thing and there will be supernatural provision. Miracle money will be there at the end of the fishing rod God wants you to take.