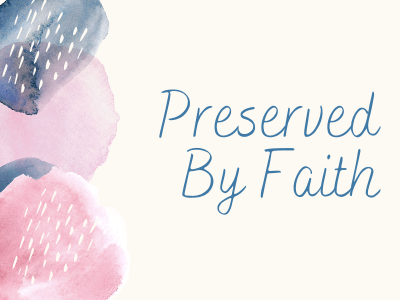 Hebrews 11:6-7: 6 But without faith it is impossible to please Him, for he who comes to God must believe that He is, and that He is a rewarder of those who diligently seek Him. 7 By faith Noah, being divinely warned of things not yet seen, moved with godly fear, prepared an ark for the saving of his household, by which he condemned the world and became heir of the righteousness which is according to faith.

Mathew 24:37-38- 37 But as the days of Noah were, so also will the coming of the Son of Man be. 38 For as in the days before the flood, they were eating and drinking, marrying and giving in marriage, until the day that Noah entered the ark,

Gen 6:1-3- Now it came to pass, when men began to multiply on the face of the earth, and daughters were born to them, 2 that the sons of God saw the daughters of men, that they were beautiful; and they took wives for themselves of all whom they chose. 3 And the Lord said, “My Spirit shall not strive[a] with man forever, for he is indeed flesh; yet his days shall be one hundred and twenty years.”

It was a time of perversion.

If you are called to stand with the Man of God, stay there. Otherwise problems will arise.

This morning, the Holy Spirit will give you a fresh realization of your calling.

If God called you as number 5, don’t try to be number 1. If you remain in number 5, it will be a blessing. If you get out of it, unwanted problems will come your way.

WHAT WAS THE KIND OF GENERATION THAT NOAH LIVED IN?

1) It was a generation that went after prosperity

Genesis 4:20- 20 And Adah bore Jabal. He was the father of those who dwell in tents and have livestock.

2) It was a generation that had an addiction to music

Genesis 4:21- 21 His brother’s name was Jubal. He was the father of all those who play the harp and flute.

3) It was a generation that invented weapons

Genesis 4:22- And as for Zillah, she also bore Tubal-Cain, an instructor of every craftsman in bronze and iron. And the sister of Tubal-Cain was Naamah.

4) It was a generation of polygamy

Genesis 4:23- Then Lamech said to his wives: “Adah and Zillah, hear my voice; Wives of Lamech, listen to my speech! For I have killed a man for wounding me, even a young man for hurting me.

William Carrey an anointed Missionary who came to India. He had translated the Bible into many languages. He was translating the verse below, his wife was fettered in shackles in another room. She was mentally unstable. But he stood faithful to her till her death.

Roman 8:28- 28 And we know that all things work together for good to those who love God, to those who are the called according to His purpose.

5) It was a generation that took revenge

Genesis 4:24- If Cain shall be avenged sevenfold, then Lamech seventy-sevenfold.”

Genesis 6:8-9- 8 But Noah found grace in the eyes of the Lord. This is the genealogy of Noah. Noah was a just man, perfect in his generations. Noah walked with God.

The Holy Spirit says that just there was a Before Christ (BC) and After Christ (AC), there will be a Before Corona and After Corona in your life. Things will change. There will be an outpouring of grace after this period. You will not just listen about it but will experience it. By His grace you will step into something great!

WHAT DID NOAH BELIEVE?

Noah, by faith, built an ark.

Hebrews 11:7- 7 By faith Noah, being divinely warned of things not yet seen, moved with godly fear, prepared an ark for the saving of his household, by which he condemned the world and became heir of the righteousness which is according to faith.

We need to have faith for preservation

But God says, what you do first, do it big, not small! God will make you do it by His grace. God will give you Dimensions and measurement and cause you to do beyond what you ever thought

Stephanos preached only one message in all his life. But he preached form the Old Testament in such an excellent way that a Saul who was in the midst of the people ready to stone him was saved. Your first ministry will be big in a way that glorifies God.

2) Noah believed it will rain

3) Noah believed that all the animals will come

During the Lockdown period, all what you need and your blessing will come to your homes. Manna and quails came to the Israelite camp. Elijah was where God wanted him to be and the bread came through the raven right there.

4) Noah believed that the sea would come to his door step.

Context in the ark

- God shut the door of the ark and Noah & his family couldn’t get out whenever they wanted. - All the animals had to stay and sit together. The rabbit keeps running around. The Giraffe

interfered in everyone's business. You need the grace of God and the faith to keep all these together and take care of this diverse and big family. No matter how they all are were, they had to be taken together. - Even during lockdown we all have to sit together. It may have been hot inside the ark. - Elephant shit may fall. Someone had to clean up and go up to the topmost deck to throw it out of

the window above. - Every time Ham woke up a bit late, he would be in ankle deep animal pee! This is not easy! But

possible by God’s grace and faith. - There were rats running around that were carriers of viruses. Noah and his family had no sanitizer

and no masks. But he had faith that by the Blood and Name of Jesus no virus would touch him. - The Hippo would open its mouth sow ide that smaller animals could get engulfed in it. - Noah was in the ark for one and half years. Clean up your homes. - Ministry at home involves even changing diapers of kids. Within my family, I can do my ministry

by faith. Help your wife. That is a ministry that glorifies God.

But Noah had a faith to deal with all of this!!