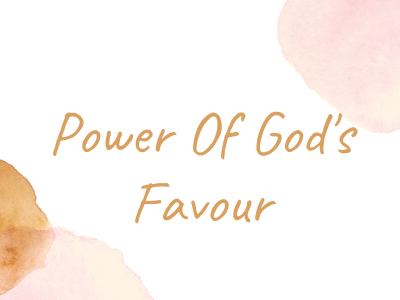 The Power of God's Favour

BLESSING AND FAVOUR ARE DIVINELY CONNECTED

Blessing means empowerment to prosper, excel, succeed, increase, multiply and rise above everything that keeps you down. Favour is that which produces the opportunity for you to be blessed.

Favour is God's extra on your ordinary!

Favour is divine super on the human!

Favour will make you stand out

BLESSING AND GOD'S MERCY ARE DIVINELY CONNECTED Psalm 102:13- when mercy shows up, favour shows up.

Genesis 39:21- God was with Joseph and showed him mercy and gave him favour in the sight...

Favour is that which makes you have an impact!

Go into the deep, sharks and whales. Somebody's business is going to go into the deep waters. You will catch big huge fish because of the favour of God.

You are going to break records!

You cannot offend God and expect God to defend you.

Promise over Abraham: I shall make your name great and I shall use you to be a blessing into the nations of the world.

GOD HAS GOT YOU COVERED