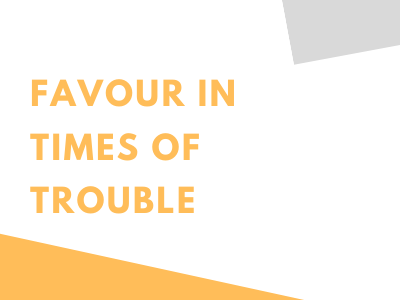 Favour in times of trouble

Favour in times of trouble

Proverbs 16:15- In the light of the king’s face is life, And his favor is like a cloud of the latter rain.

If there is anybody who is going through difficult times, don’t be burdened, the God you have approached this morning, will send forth His healing, love, deliverance upon you. If you believe it, pray and sing in the Spirit.

THERE IS A SAYING THAT WHEN GOD FAVOURS YOU, HE ALLOWS SOMEONE TO BE A PROBLEMS SOLVER IN YOUR LIFE.

FAVOUR IS MENTIONED AS AN ATTITUDE OF GOOD TOWARDS YOU; IT MEANS A WILLINGNESS OR AN ABILITY OF SOMEONE TO HELP YOU TO HAVE SOMETHING YOU WANT. GOD IS TURNING SOME BODY’S HEART FAVOURABLY TOWARDS YOU, TO HELP YOU.

FAVOUR IS THAT WHICH DETERMINES THE LIMIT OR THE BOUNDARY OF YOUR DESTINY OR YOUR LIFE.

FAVOUR IS THE IMPARTIAL PARTIALITY OF GOD.

The Holy Spirit is saying this to someone who is depressed: God’s favour is finding you. Don’t be afraid to jump up again and look to the face of Jesus Christ. God is favouring you now to be used by God again.

This morning there is healing in the Name of Jesus. Let that skin disease leave. Let the fibroid in your uterus leave.

When God favours you, your mistakes become miracles.

Somebody is messing up, somebody else God is warming up!

God has stopped coming down from heaven. He is using people here on earth.

Psalm 27:7-9- Hear, O Lord, when I cry with my voice! Have mercy also upon me, and answer me. 8 When You said, “Seek My face,” My heart said to You, “Your face, Lord, I will seek.” 9 Do not hide Your face from me; Do not turn Your servant away in anger; You have been my help; Do not leave me nor forsake me, O God of my salvation.

Seek the FACE of the Lord. That is the primary thing.

Mathew 6:33: Seek ye first the kingdom of God and His righteousness and all these things shall be added unto you

God is touching somebody’s heart here today- I am seeing a man with white shirt and white mundu. You may nto be very keen to watch this service but God is knocking at your door.

You should knock for eternal things.

God says- David are looking into My heart? I will rebuild the broken tents of David. If you are seeking and knocking, the Lord is faithful to build your home.

GOD’S FAVOUR IN TIMES OF TROUBLE

The Bible says if two or more come together in My name, there I will come into their midst. There is a favoured gathering. We forgot the value of that, perhaps that’s why the Lord allowed this. Pastor says that he still wants to see our faces and prays that the Lord would how forth His mercy and open doors for the people of God to come together. There are six ways of coming together as per the Word.

Genesis 49: 1-2- And Jacob called his sons and said, “Gather together, that I may tell you what shall befall you in the last days: 2 “Gather together and hear, you sons of Jacob, And listen to Israel your father.

Gensis 49:3-4- Reuben, you are my firstborn, My might and the beginning of my strength, The excellency of dignity and the excellency of power. 4 Unstable as water, you shall not excel, Because you went up to your father’s bed; Then you defiled it— He went up to my couch.

Genesis 49:5- Simeon and Levi are brothers; Instruments of [a]cruelty are in their dwelling place.

What about Reuben? How come he was inducted into the blessing?

Even if you parents are in the wrong, and you are right, you still have no right to pounce back on them. When you take that decision, God will send such great blessing and favour upon you that you will be saturated by it.

Let not your head ever refuse rebuke. You need somebody to checkmate you and correct you.

Pastor: I don’t want to be a war lord to myself where nobody can speak to me and where I feel that I am always right.

Genesis 49:28- All these are the twelve tribes of Israel, and this is what their father spoke to them. And he blessed them; he blessed each one according to his own blessing.

Verses 8-9 - “Judah, you are he whom your brothers shall praise; your hand shall be on the neck of your enemies; your father’s children shall bow down before you. 9 Judah is

a lion’s whelp; from the prey, my son, you have gone up. He [a]bows down, he lies down as a lion; And as a lion, who shall rouse him?

What is the blessing of the breast?

➢ It signifies nourishment. ➢ It implies a finished product. ➢ It is a blessing that is perfected by God.

God is going to give someone a house that was built for somebody else. Some of you will receive charge in your jobs to run the full show!

What is the blessing of the womb?

Psalm 147:10- His pleasure is not in the strength of the horse, nor his delight in the legs of the warrior;

STOP networking! Without God’s favour networking is a waste of time.

Psalms 50:5, 15- “Gather My saints together to Me, Those who have [a]made a covenant with Me by sacrifice.” Call upon Me in the day of trouble; I will deliver you, and you shall glorify Me.”

Daniel 3:2- And King Nebuchadnezzar sent word to gather together the satraps, the administrators, the governors, the counselors, the treasurers, the judges, the magistrates, and all the officials of the provinces, to come to the dedication of the image which King Nebuchadnezzar had set up.

The Holy Spirit is saying that in Egypt, money failed them. Don’t keep your refuge in money. Don’t serve money.

There is an anointing for you, if you uncompromisingly walk in the favour of God, no matter how great the king is, they will bow down before you whatever is not of God will bow before you.

The Holy Spirit is saying that some of you even if you are going through COVID-19, the children of God will come out without ANY issue. Your children, your business, your health, will remain untouched. Heaven will be with you. You will come through! But stand faithful.

Daniel 3:29- 29 Therefore I make a decree that any people, nation, or language which speaks anything amiss against the God of Shadrach, Meshach, and Abed-Nego shall be cut in pieces, and their houses shall be made an ash heap; because there is no other God who can deliver like this.”

The Holy Spirit is saying, “Don’t panic over money matters”.

WHY SHOULDN’T YOU PANIC OVER MONEY MATTERS?

Mathew 6:24- “No one can serve two masters; for either he will hate the one and love the other, or else he will be loyal to the one and despise the other. You cannot serve God and [a]mammon.

If you are serving God, then you will be worried about these three

Pastor’s anecdote: I don’t have a Master credit card. I have a VISA but not a Master card. This cannot be my Master. I only have Jesus as my master.

Daniel 3: 30- 30 Then the king [a]promoted Shadrach, Meshach, and Abed-Nego in the province of Babylon.

The King promoted them!

God is taking some of your ministries to another level. There is a promotion at the end of the lockdown.

You shall receive the

Verse 18- This will be written for the generation to come, That a people yet to be created may praise the Lord.

There is a generation that the Lord is created during the lockdown, they are new creation, a new generation. God’s favour will come upon them.

Verse 20, 21- o hear the groaning of the prisoner, To release those appointed to death, 21 To declare the name of the Lord in Zion, And His praise in Jerusalem, 22 When the peoples are gathered together, And the kingdoms, to serve the Lord.

The Lord is delivering people who are sentenced to death either because HIV or cancer. We speak forth the deliverance. Whatever the negative report may be, it is terminated in the name of Jesus.

Verse 22- When the peoples are gathered together, And the kingdoms, to serve the LORD.