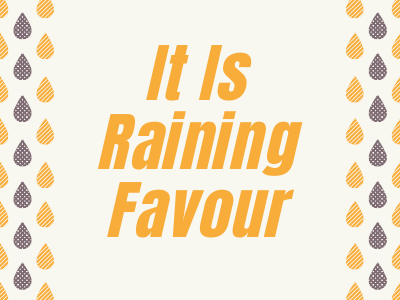 Deuteronomy 11:14- 14 then I will give you the rain for your land in its season, the early rain and the latter rain, that you may gather in your grain, your new wine, and your oil.

Luke 1:28- 28 And having come in, the angel said to her, “Rejoice, highly favored one, the Lord is with you; [a]blessed are you among women!”

Some of you are receiving a new anointing, some will experience the fire of the Holy Spirit, some of who are tired are becoming fresh and some are getting out of their dryness.

The latter rain is to complete that which God already started in you.

Favour is a silent catalyst that sponsors celebration

The greater one is stooping down for you. God’s favour is smiling at you.

God’s favour will distinguish you

The Word favour also means to be provided with advantages.

Let the Holy Spirit give you an understanding that you are special and have been chosen by God. He has set you apart and He has singled you out to glorify God.

The prophetic declaration is like a volcano ready to erupt.

Job 10:12- You have granted me life and favour, And Your care has preserved my spirit.

Namaan. I am a special people, a Holy nation, a Chosen Generation. He chose you out of the many millions.

Despite having fallen several times, He has called you back because of His favour. He has shown mercy

Favour means God extending his kindness to you

You are not exempt from trouble just because you have favour. But that trouble won’t destroy you.

Psalms 41:11- By this I know that You are well pleased with me, Because my enemy does not triumph over me.

The Lord is saying to somebody that you are struggling with this disease for 5 years, God is releasing that favour to live for the next 50 years.

Psalm 31:7- I will be glad and rejoice in Your mercy, For You have considered my trouble; You have known my soul in [a]adversities,

There are some people that God can trust with trouble.

In Psalms 102, David days that this is the set time of favour.

If a child that was left in Nile River reached the palace, where would we who are released into the river of Life (of the Holy Spirit) reach?!

I am in the river of the Holy Spirit.

Zechariah 10:1- Ask the Lord for rain in the time of the latter rain. The Lord will make flashing clouds; He will give them showers of rain, Grass in the field for everyone.

Why should you pray specifically in this season?

How should you ask?

institutions are being shaken. All industries are shaken. In the midst of that The LORD is saying, I will rain the rain for favour upon you.

The rain doesn’t bring down the grass from heaven along with it! Someone should have planted the seeds here on earth before the rains.

This is a prophetic declaration over somebody. Somebody has sown a seed. Somebody has initiated a start-up. God is saying that you will reap of the seeds sown by others.

You are reaping its benefits. 2. Seeds sown by you but forgotten: Some seeds you had sown but have long

forgotten about it. Some seeds of desire to serve the Lord or to travel abroad or to study abroad. You have forgotten it. You think, how can I go abroad now? 3. Seeds being sown newly: Now there are seeds that you are newly sowing. Sow in

In the time of the latter rain, ASK.

The rain of favour is falling ☺