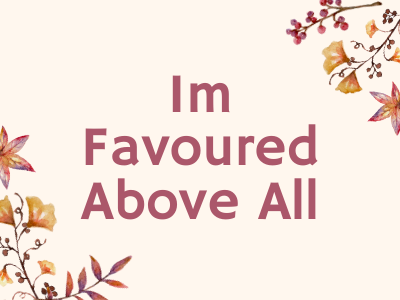 The Lord is not allowing me to move into another message. There will surely be a release of an anointing of God’s favour upon His church. If you believe so, Worship in the Spirit

Esther 2:17--17 The king loved Esther more than all the other women, and she obtained grace and favor in his sight more than all the virgins; so he set the royal crown upon her head and made her queen instead of Vashti.

It is not us making a way for ourselves. It is God who is breaking open a way in front of us supernaturally.

Opportunities always disguise themselves as obstacles. You may have a feeling of unworthiness; BUT it is not that.

Even if you are favoured, you must learn to be patient. Be willing to wait upon God with the right attitude.

If you want to become one favoured by God, you have to put a system in place. You need to pray or read the Word of God.

What’s in your private life is what manifests in the public life.

God is giving some people the wisdom to set up a God given system in your life. Financial systems for financial miracles, spiritual systems of prayer and word for spiritual success.

I made a system that I will not waste a single moment in my life. Whether it is to encourage someone, or celebrate something or create memories. I won’t even waste my mistakes. I will learn from it. I will surrender them to Jesus. Earlier I used to have a “take life as it comes” kind of an attitude; but not anymore. I put a system that I will honour my parents--- I have a system in place for that. Though I used to know the importance of honouring parents it in the past, I used to still lose my cool with them. But now that has stopped. I will only says things in appreciation of them, even if they kill me, I will still respect them.

Philemon 1: 4- I thank my God, making mention of you always in my prayers,

To put a SYSTEM in place means planning a process

uniform; if you say you will go to work and not even change your lungi, then how do you expect to see the promise??

LET’S LOOK AT SOME CHARACTERS IN THE BOOK OF ESTHER

1) VASTHI- She refused to show up

2) Ahasuerus King – He is easily persuadable

4) Mordecai- he was the man behind the scene

GOD HAS THREE TYPES OF CHILDREN

The 1st type: This one is likened to the prodigal son

The 2nd type: This one a son but is bitter hearted

Onesimus was a slave who worked in Philemon’s home. He had robbed Philemon and ran away from there. Paul met Onesimus in Rome. Paul brought Him to the Lord. Paul is saying this to Onesimus to go back to Philemon and to repair his relationships. Paul is saying that “he is very profitable to me. He is like a son to me”! (Despite the fact that Onesimus was actually a slave) • Philemon was a rich man. He had lots of money, he also opened his home up for the

church. But Paul is saying that more than the Philemon, Onesimus is much more profitable to him!

In accordance to my stewardship and faithfulness, God’s favour comes upon me. I don’t serve God out of duty.

I have not put anybody in ministry because they gave me offering and they have lots of money or come from a big family. But if your heart is right with God and you have a relationship with the Lord, He will grant you favour and make you favoured.

GOD IS TELLING YOU: learn to enjoy the party! God the Father has organised a supernatural party for His children. There is anointing, party, gifting’s, celebration, an outpouring of His presence. Don’t stand far off.

The 3rd type: This son was favoured above both of them

Hebrews 3:4-6- 4 For every house is built by someone, but He who built all things is God. 5 And Moses indeed was faithful in all His house as a servant, for a testimony of those things which would be spoken afterward, 6 but Christ as a Son over His own house, whose house we are if we hold fast the confidence and the rejoicing of the hope [a]firm to the end.

Mathew 3:17- 17 And suddenly a voice came from heaven, saying, “This is My beloved Son, in whom I am well pleased.”

In the New Testament, works are not important but the relationship.

You will feel that “this is my Father’s House. I have to steward it and watch over it.”

Help me to be a good steward

➢ The first son comes from pride and rebellion. ➢ Second son says I won’t walk with him but I will work with the father. Slightly better

than the first son. ➢ The third son says, “I am the beloved son of God”.

When you understand this, your life will change your prayer will change!

Inability to give or receive love is a sign of sickness.

DISCOVERY- FAVOUR ABOVE ALL