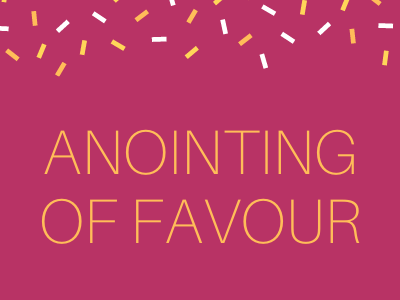 The Anointing of Favour

The Anointing of Favour

Let them ever shout for joy, because You [a]defend them;

Let those also who love Your name

Be joyful in You. 12 For You, O LORD, will bless the righteous; with favour, yousurround them as with a shield.

Isaiah 10:27- It shall come to pass in that day, that his burden will be taken away from your shoulder, And his yoke from your neck, And the yoke will be destroyed because of the anointing oil.

2 Kings 13:4 (ESV)- 4 Then Jehoahaz sought the favor of the Lord, and the Lord listened to him, for he saw the oppression of Israel, how the king of Syria oppressed them.

The Holy Spirit is shifting the children of God into a different dimension (in your lifestyle, your perspective, your way of living, the way you think). Everything will be changed by the Holy Ghost. The Lord Himself will break every yoke that is coming in the way of this shift from happening.

I became very sure in my heart that God has to produce through me. You need the Holy Spirit, you can’t do everything by yourself.

It is favour that increases your influence. Favour brings supernatural turn arounds. Favour breaks off all limitations. Favour reawakens dreams. The favour gives you back opportunities that were lost. Wide open doors of divine possibilities. Heavens have opened a door for you because of favour.

Favour is the supernatural grace that God gives to accomplish His will and to move forward despite challenges, struggles and opposition and experience victory.

Psalm 5:12 says that we are Surrounded by favour.

It doesn’t matter which way you turn. There is favour everywhere. Whatever direction I turn, I see the favour of God. The Holy Spirit needs to give you a picture. You are not limited by location. Favour is always available.

Favour is a constant companion. Wherever you look, there is favour. Look to your right, say hello favour!

When you have favour, you become intense in worship and prayer.

Verse 11: But let all those rejoice who put their trust in You;

Let them ever shout for joy, because You [a]defend them;

In Mark 4, we see that the storms arose. The storm actually came to stop them from going over to the other side. If it was any other boat, it would have been torn into pieces. But because there was Jesus in that boat, it crossed over. No more the high winds and the strong waves. The favour of God will defend me!

Verse 12: He will bless the righteous.

There are two kinds of righteousness:

This verse refers to the second type of righteousness.

Set me on fire, oh Holy Spirit. Let your ministry move to another level, by the anointing of favour

WHAT IS THIS ANOINTING OF FAVOUR?

1 Chronicles 12:1,17, 18- 12 These were the men who came to David at Ziklag when David was hiding from Saul son of Kish. They were among the warriors who helped David in battle. 17 David went out to meet them and said to them, “If you have come

peacefully to help me, I welcome you. Join me. But if you have come to turn me over to my enemies, even though I have done nothing wrong, the God of our ancestors will see this and punish you.” 18 Then the Spirit entered Amasai, the leader of the Thirty, and he said: “We belong to you, David. We are with you, son of Jesse. Success, success to you. Success to those who help you, because your God helps you.”

Verse 12: They were helpers of the war/ in the battle

God is healing someone of gall bladder stone

How can these people help David aren’t they with Saul? Aren’t they of the tribe of Benjamin?

You attract this favour when you have a mind to engage with the what is in the heart of God. That is evangelism. Spreading of the gospel.

Mark 14:1-9- A Woman with Perfume for Jesus: 3 Jesus was in Bethany at the house of Simon, who had a skin disease. While Jesus was eating there, a woman approached him with an alabaster jar filled with very expensive perfume, made of pure nard. She opened the jar and poured the perfume on Jesus’ head. 4 Some who were there became upset and said to each other, “Why waste that perfume? 5 It was worth a full year’s work. It could have been sold and the money given to the poor.” And they got very angry with the woman. 6 Jesus said, “Leave her alone. Why are you troubling her? She did an excellent thing for me. 7 You will always have the poor with you, and you can help them anytime you want. But you will not always have me. 8 This woman did the only thing she could do for me; she poured perfume on my body to prepare me for burial. 9 I tell you the truth, wherever the Good News is preached in all the world, what this woman has done will be told, and people will remember her.”

Psalm 114- what will I render unto God for all HE has done for me. Psalm 103- Forget not all His benefits

Deuteronomy 8:10- 10 When you have eaten and are full, then you shall bless the Lord your God for the good land which He has given you.

We all thank God before we eat. The Word says, after you eat, thank Him!

NEVER FORGET WHAT THE LORD HAS DONE.

When I look at you, I know how you were when you came first to church. Now, you all are big people! But sometime in the past, you needed this pastor’s prayers. But you forget. People will use you to get to the place where they want to be and they will forget you.

Romans 12:1-2- I beseech[a] you therefore, brethren, by the mercies of God, that you present your bodies a living sacrifice, holy, acceptable to God, which is your reasonable service. 2 And do not be conformed to this world, but be transformed by the renewing of your mind, that you may prove what is that good and acceptable and perfect will of God.

2) She refused to compare herself with others

But some people are not like that. Another example: When you are running a race, a person is far ahead of the others. The people behind are still running. The one ahead of them can see that they are all behind. He now begins to feel that he can slow down and doesn’t need to run that fast anymore. He is not giving his best. Those behind also begin to think ‘what is the point running now!’. You are not giving your best. There may be people who are running ahead of you. You don’t compare with the better or the lesser. But are YOU are willing to give Him your best.

Giving your best is never a waste.

Some people express their worship like they are giving their best. They sing, jump, cry.

Acts 15:25-26 (NKJV)- 5 it seemed good to us, being assembled with one [a]accord, to send chosen men to you with our beloved Barnabas and Paul, 26 men who have risked their lives for the name of our Lord Jesus Christ.

That window of opportunity will not be open always.

One man of God has churches in 50 nations. He was 62 years old only. He went to be with the Lord when he was driving back from church. Many other men of God saw a vision of the Lord saying to him, ‘Well done good and faithful servant.’ We do not know how long we are

going to live. Don’t think that you will have the opportunity to fast at all times. Fast now. When you can, give your best for Jesus.

The anointing oil of favour. Mary got the priority, prominence and preferential treatment because she did not miss the opportunity and she gave her best for Jesus. In fact, she did not even that she was preparing the body of Jesus for the day of burial!