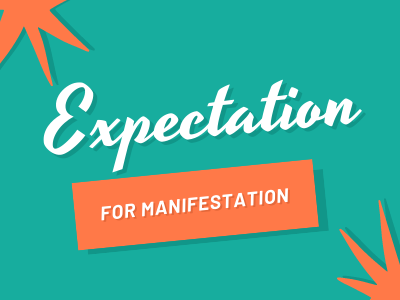 Luke 1: 57- 57 Now Elizabeth’s full time came for her to be delivered, and she brought forth a son

Expectation for manifestation. God never intended to use anybody without first giving them an experience or an encounter.

The Holy Spirit is saying to the church in 2021, “You will have an experience and understanding of His presence in new ways, like never before. It will manifest in yourministry, wealth and in your health!”

In Jesus name, certain things will manifest through your life. Our God is a good God.

“It is not enough that my

You are favoured for supernatural encounters. What is expectation?

Some things that you know within you that has to happen.

company stays at this level, it is not enough that I remain here. Anointing and healings must flow through me”

Job 3:25- For the thing I greatly feared has come upon me, And what I dreaded has happened to me.

Hebrews 10:12-13- 12 But this Man, after He had offered one sacrifice for sins forever, sat down at the right hand of God, 13 from that time waiting till His enemies are made His footstool.

Someone watching me is troubled for suicidal thoughts because of opposition over your life. Don’t do it. This is the year that God’s goodness is going to manifest forth through your life. Two persons are going through this. That hopelessness to go. Declare that you are victorious in Christ.

Why is heaven and hell interested in your expectation?

Expectation is the womb that carries the manifestation.

Proverbs 10:28- The hope of the righteous will be gladness,

But the expectation of the wicked will perish.

Proverbs 28:13- He who covers his sins will not prosper, but whoever confesses and forsakes them will have mercy.

Mercy has a twin brother. It is favour. Mercy and favour are connected.

Unmerited favour of God manifests only when His mercy shows up in your life. That is how pregnant women prepare for delivery.

When it was Tanya’s time for delivery, she was ready with her bag though the hospital told us that they would give us sheets etc. We were ready with our bag. We need to be ready with our bags. Our minds and hearts have to ready and prepared. In India, many hospitals in

villages do not have even a cotton roll in the clinics. Be prepared in prayer, in your minds and then you are prepared to push. You can scream but you still got to push.

PUSH! Pray Until Something Happens

I have to take stock, I have to get ready, I have to be prepared, it is my time,

I need to push this baby out, I need to be involved with God. God wants my

involvement. I can’t be sitting at home and saying ‘I am in pain’ and not do

anything. I need to get ready and prepare to PUSH! I will push!! my miracle

out in the Name of jeuss.

2 Chronicles 13:2- 2 He reigned three years in Jerusalem. His mother’s name was [a]Michaiah the daughter of Uriel of Gibeah. And there was war between Abijah and Jeroboam. 3 Abijah set the battle in order with an army of valiant warriors, four hundred thousand choice men. Jeroboam also drew up in battle formation against him with eight hundred thousand choice men, mighty men of valor. 4 Then Abijah stood on Mount Zemaraim, which is in the mountains of Ephraim, and said, “Hear me, Jeroboam and all Israel:

You need hope and expectation, especially when you set out to go for war.

Verses 5: 5 Should you not know that the Lord God of Israel gave the dominion over Israel to David forever, to him and his sons, by a covenant of salt?

Genesis 26:24- 24 And the Lord appeared to him the same night and said, “I am the God of your father Abraham; do not fear, for I am with you. I will bless you and multiply your descendants for My servant Abraham’s sake.”

Your blessing is much bigger than you. It goes beyond you! Your connection with God benefits not just you but your generations!

God is releasing a unique grace this day upon people to give you victory over every trap and intimidation of the enemy. It is time for you to stand up and face the battle.

God will help you. He will impart His wisdom over your life. This year, all those appearing for exams, make this your declaration. This year may have been tough but still, God will give me victory!

2 Chronicles 13:14- 14 And when Judah looked around, to their surprise the battle line was at both front and rear; and they cried out to the Lord, and the priests sounded the trumpets. 15 Then the men of Judah gave a shout; and as the men of Judah shouted, it happened that God struck Jeroboam and all Israel before Abijah and Judah.

A 45-year-old person is watching and is gripped with fear that you will die. But with long life HE will satisfy you! Hold on to that promise.

Verse 20- 20 So Jeroboam did not recover strength again in the days of Abijah; and the Lord struck him, and he died.

Genesis 8:22- “While the earth remains, Seedtime and harvest, Cold and heat, Winter and summer, And day and night Shall not cease.”

You want great harvest but you haven’t’ sown anything. To reap, you must sow! There is power in giving. Harvest manifests when you give.

1 Chronicles 21:1- 21 Now Satan stood up against Israel, and moved David to [a]number Israel. 7 And [a]God was displeased with this thing; therefore He struck Israel. 14 So the Lord sent a plague upon Israel, and seventy thousand men of Israel fell. 18 Therefore, the angel of the Lord commanded Gad to say to David that David should go and erect an altar to the Lord on the threshing floor of Ornan the Jebusite. 26 And David built there an altar to the Lord, and offered burnt offerings and peace offerings, and called on the Lord; and He answered him from heaven by fire on the altar of burnt offering. 27 So the Lord commanded the angel, and he returned his sword to its sheath.

Certain provocations are from the devil. Don’t give into it.

Let this year be turned into a year where God’s blessing is manifested over your family. Let the devil’s challenge against you and your family be broken. Let 2021 be a year where you see it.

The Holy Spirit says: The Lord is saying “IT IS ENOUGH” to angels and God is sending deliverance on some issues. For your sake, the Lord is saying this to his angels. The heavens intervening for you and for me. There are intervening angels for you and me. I am speaking from experience. Certain issues are going to resolved due to the work of the intervention angels. Let Angels intervene in your life. The “ALMOST THERE” experiences are going to change.

It is the Biblical protocol to give thanks.

Psalm 100:4- Enter His gates with thanksgiving and courts with praise.

house due to a feeling? We just so it when we need to enter. Even if you don’t feel like it, say thanks!

Philippians 4:6- 6 Be anxious for nothing, but in everything by prayer and supplication, with thanksgiving, let your requests be made known to God;

God doesn’t hear a prayer without thanksgiving in it. ONLY PRAYERS ALONG WITH THANKSGIVING IS WHAT GOD HEARS.

Daniel 6:10- 10 Now when Daniel knew that the writing was signed, he went home. And in his upper room, with his windows open toward Jerusalem, he knelt down on his knees three times that day, and prayed and gave thanks before his God, as was his custom since early days.

Daniel 6:22- 22 My God sent His angel and shut the lions’ mouths, so that they have not hurt me, because I was found innocent before Him; and also, O king, I have done no wrong before you.”

NOTHING WILL TOUCH YOU. HIS ANGELS WILL PROTECT YOU!

Your Relationship with Jesus will cause you to receive from Christ, it is not which denomination you are from.