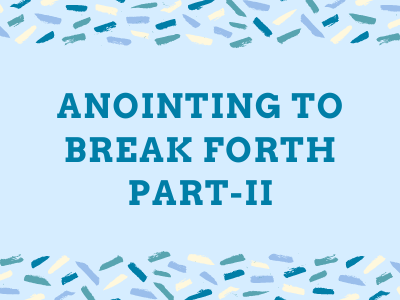 Anointing to Break Forth - Part II

Anointing to Break Forth - Part II

1 Samuel 10:1- Then Samuel took a flask of oil and poured it on his head, and kissed him andsaid: “Is it not because the LORD has anointed you commander over His [a]inheritance?

Wherever you are, if the Holy Spirit descends to where you are, your status will change. He will change you into the person that he wants you to be.

Your story will change. God will make you a captain in the field that you are in.

More superior to education is salvation and anointing.

The Holy Spirit is saying that you have miles to go. There are many things that God wants to do through your life. This word is for some senior citizens.

What you couldn’t achieve in youth or middle age, God will cause you to achieve in your old age. One year is too much for God to work in your life.

into the mirror and say “wow! I am surprised at myself”. When everyone is fearful, you will feel an unusual peace and love of God moving through your life!

Psalms 90:14- "Satisfy us in the morning with your unfailing love, that we may sing for joy and be glad all our days." Satisfy us early with your mercy

WHAT DOES THE ANOINTING DO?

God told me, if you can buy land only with money, then that is not my heart. There is something wrong. But I will give you land as a product of my favour. Do not buy any property without the favour of God.

Psalm 44:3- For they got not the land in possession by their own sword, neither did their own arm save them: but thy right hand, and thine arm, and the light of thy countenance, because thou hadst a favour unto them.

God is releasing land to someone who doesn’t have an own house. God is opening up blocks and God is going to bless you. Even in this time of lockdown, certain lands deals will be signed.

Esther 2:15- 15 Now when the turn came for Esther the daughter of Abihail the uncle of Mordecai, who had taken her as his daughter, to go in to the king, she requested nothing but what Hegai the king’s eunuch, the custodian of the women, advised. And Esther obtained favor in the sight of all who saw her.

God’s spotlight on you is favour. Wherever you walk, that spotlight will follow you. May God’s awesome favour descend wherever you are.

When you decide to sit at His feet and listen to His Word, you will receive what you did not struggle for.

John 21: 6- "And he said unto them, Cast the net on the right side of the ship, and ye shallfind. They cast therefore, and now they were not able to draw it for the multitude of fishes."

The Holy Spirit gives specific instructions. You can walk in Godly fruitfulness when you listen to God’s instructions.

Within instructions is my blessing. If we listen to instructions, frustration will leave.

The Lord will never lead you to destruction. He will only lead you to distinction. God leads you through his instructions. Do it!

The Holy SPIRIT is Jesus UNLIMITED

He is not restricted by place. Wherever you are, in Kochi, in Trivandrum or wherever else, HE will come. I used to wish I could be one of the disciples of Jesus and walk with Him. But the truth is it is wonderful to be have the Holy Spirit of God with us. Jesus says it is to your advantage that I go so that the Holy spirit can come down. WOW!

God’s presence, His Holy Spirit is unlimited, whether it is inside a forest or in any other pace, may the Holy Spirit give you an assurance that He is with you.

solutions to problems. Some of you will feel it, it will feel like oil is flowing into your eyes and over your body. Let an anointing for healing flow through restoring your bodies.

Anointing to BREAK forth! Break forth means

Isaiah 58:8- Then your light will break forth like the dawn, and your healing will quickly appear; then your righteousness will go before you, and the glory of the LORD will be your rear guard.

This is anointing. You need to connect with it.

Genesis 38:27-29- 27 Now it came to pass, at the time for giving birth, that behold, twins were in her womb. 28 And so it was, when she was giving birth, that the one put out his hand; and the midwife took a scarlet thread and bound it on his hand, saying, “This one came out first.” 29 Then it happened, as he drew back his hand, that his brother came out unexpectedly; and

she said, “How did you break through? This breach be upon you!” Therefore his name was called Perez.[a]

You can declare that it is by the name of Jesus, by the Perez anointing and by the oil of the Holy Spirit. By the grace of God.

There are many people who will take the lead but cannot sustain the advantage. But Perez is the anointing that brings to the front the ones who are lying behind.

Ecclesiastes 7:8- Better is the end of a thing than the beginning thereof: and the patient in spirit is better than the proud in spirit.

Zerah was impatient. It is better to be patient. “I will be patient. God will bring the good that He has kept for me.”

When had an opportunity to marry I was 42. After much back and forth and facing several of my fears, I made a decision. I thought I was old. One wise man told me, “you are young! Don’t compare yourself. When others are riding scooters, you ride an R1 superbike. There is still energy inside of you!” It was a simple thing, I became free. What am I telling you? Be patient, your story will end in favour for you.

HOW TO CONNECT TO THIS ANOINTING?

Pharoah and Herod will not understand the plans that God has for you. 3. Start from where you are and you will overtake 4. Make use of the opportunities that God has opened up over your life and go through it