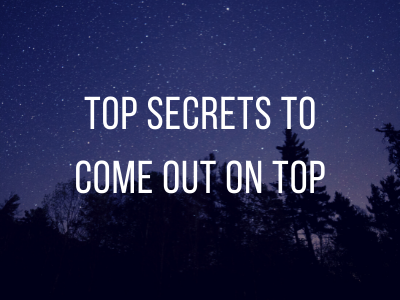 Top Secrets to Come Out on Top

Top Secrets to Come Out on Top

“My heart rejoices in the Lord;

My [a]horn is exalted in the Lord.

[b]I smile at my enemies,

Because I rejoice in Your salvation.

God wants us to be in an enviable place and rather than a pitiable place.

Everyone had a dream and vision. Be it Joseph or Daniel or anybody else who rose high in the Bible. Ask the holy spirit to fill you with dreams and vision these coming days if you do not have one. Be filled with the spirit and attain a vision.

They were not like ordinary people. In their word deed and in the way they spoke. They kept their lives. They were different.

1 Corinthians 3:3 King James Version (KJV)- for you are still carnal. For where there are envy, strife, and divisions among you, are you not carnal and [a]behaving like mere men?

When you genuinely, from your heart celebrate someone else's victories without envy - you attract the same blessings towards you.

Lord send me not where Your Presence does not go. Don’t entertain anything that will make you lose out on the presence of God in your life. Even within your homes, don’t wallow anything that can take away God’s presence from showing up. Lies, arrogance, sins, relationships out of His will etc.

God has a plan for your life, I am saying this to the ones who are older and listening to me. If you understand this purpose, you will survive this pandemic no matter how hard the situations are. Live by convictions and not conveniences. Have that conviction that there is no salvation in any other name by the revelation of the Holy spirit. Do not be worried about what people will say. All that doesn’t matter.

You cannot face back and be found in the front.

The Joy of the Lord is my strength. Be excited in the Lord.

Everyone of us have to keep on growing. The things that you know is what brought you up to the level that you are in currently in your life. So, if you need to grow further, then you need to know something that you did not know before.

Information is the basis for promotion.

A child who is in 1st year needs is additional information/ knowledge to qualify to second grade. Elevation is determined by your revelation.

Galatians 2:2- I went in response to a revelation and, meeting privately with those esteemed as leaders, I presented to them the gospel that I preach among the Gentiles. I wanted to be sure I was not running and had not been running my race in vain.

There is a saying- “Seek not to be known but seek to know”. What you know will make you known.

➢ Spirit needs revelation in the Holy Spirit, intercession, association (relationship with the Lord and the church and people that God has put your midst)

Refuse to be distracted. If you chase two peacocks at once, both will escape. Focus on one. Distraction is the enemy of distinction. Focus on one thing.

The one thing that the devil is most scared about is a life that is focused. Devil will try to distract you. Nehemiah spent 52 days building the broken walls. There was opposition and mockery to distract him from his focus on building the wall. Sanballat and Tobiah and other were trying only for this.

A trainer in a circus distracts a lion with four legs of a stool, a trainer shows the four legs to the lion. The lion tries to focus on the four legs and it is paralysed. The paralysis of action distracts the lion.

When we were kids, we used to take a magnifying glass, and focus it on the sun and that used to result in fire. For 1000 years, the sun has been there in that forest but there was no fire but only when the intensity of the sun concentrated or focused on one point, then it results in fire. That light was focused. Many a time, forest fires many a time is caused because of this.

One thing I seek after that I may dwell in the house of the Lord. Keep your focus on the Lord.

During Jesus’ ministry for 3.5 years, he focused on the ministry and he fulfilled it. David when he faced Goliath, he focused only on the forehead. If your prayer has focus this morning, Goliath will fall down in name of Jesus. God will give you victory. Refuse to be distracted.

Your focus determines your fire and also your speed

Habakkuk 2:2- Then the Lord replied: “Write down the revelation and make it plain on tablets so that a herald[a] may run with it.

Set the vision before you, write it and run!

Mathew 6:22- The light of the body is the eye: if. therefore, thine eye be single, thy whole body shall be full of light.

Distraction comes in the form of opposition, criticism, competitiveness, strife, jealously, backbiting, backstabbing. Why? Because the devil is scared of your focus.

Example: Nobody can travel nowadays. Different people are starting from different starting points from in and around Kochi, to get to the airport to go to Dubai. Will the ones who started from Vytilla or Kalamassery reach early to Dubai? No! They will all reach Dubai at the same time because they are all on the same flight no matter what the starting point of their travels are. The ones who got saved in 1990s, do not make less of the new generation of believers, we will all go to Jesus at the same time. In the same way as in the days of Noah, the eagle flew into the ark, the lion ran ahead and the tortoise slowly inched towards the ark.

However, the door of the ark wouldn’t close unless even the slowest of the creatures made it inside. God will make sure I get into the ark!

The speed of somebody else should not distract you. I will not be distracted. I will focus on MY calling!

God doesn’t plan for me to be at the ground level but to be above. That’s His plan for you. 15. Go the Extra mile

Mathew 5:41- 41 And whoever compels you to go one mile, go with him two. • Go the extra mile. Extra height is a product of extra mile.

There is no success without excess.

This morning, the Holy Spirit will lift some people who are lying low, those who are hurting, those who have seen only failures, God is lifting you up.

Number 16:32- 2 and the earth opened its mouth and swallowed them up, with their households and all the men with Korah, with all their goods.

Numbers 16:31- Now Korah the son of Izhar, the son of Kohath, the son of Levi, with Dathan and Abiram the sons of Eliab, and On the son of Peleth, sons of Reuben, took men;

➢ Dathan was against Moses too. His name means “He belongs to a fountain”. Moses, ‘I want to be next to the fountain’ they would say, there are people who always want the best place within a church. If they don’t get it, they will move on to another church whether they will be offered that place,

➢ ON- means light. They like the limelight. An opportunity to pray, minster etc. then they are on. They have the opportunity to be famous. All this is dangerous. It si dangerous in the work of God. All this will send you into destruction.

The earth swallowed them up. All the four of them and their families. However, Korah is highlighted among these four. He was the one who originated these issues. For every issue there is one who is responsible for its origin. Only the descendants of Korah were not destroyed. Others were all destroyed.

“LORD OF HOSTS- I entreat you!”, Hannah cried. Her prayer broke the power of that curse upon Elkanah’s life.

Place your hands on your children 2-6 years old and declare God’s anointing upon them. Samuel wasan exception. God did not look at maturity and age or capabilities. May our children be exceptions.

You need not be 30 years old to be a Levite priest.

GOING UP TO A HIGHER PLACE

There is going to a shift in your spiritual life.

1 Samuel 3:15- 15 So Samuel lay down until [a]morning, and opened the doors of the house of the Lord. And Samuel was afraid to tell Eli the vision.

1 Samuel 2:1,6, we read that he bringeth down to the grave. Korah and Dathan went down to the deepest dark place but HE is able to bring you up to the highest levels.