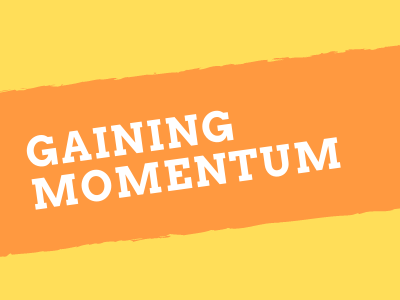 2 Samuel 5:20-20 So David went to Baal Perazim, and David defeated them there; and he said, “The LORD has broken through my enemies before me, like a breakthrough of water.” Therefore hecalled the name of that place [a]Baal Perazim.

Momentum is what brings impact.

I have momentum working for me for God is with me.

Bible uses the words, ‘going from victory to victory, from strength to strength, from glory to glory, from faith to faith.’ This is momentum. A forward movement!

You are going to burst forth, you will go forward and take possession of everything that God has got for you.

Greater the momentum, greater the impact or the further you go.

If you get one victory, don’t sit there feeling good. Now you have to move forward to another victory! If you sat for 21 days of fasting and prayer, don’t sit around satisfied. Get ready for a 40 day fast. I prayed for 8 hours, I will pray now longer!

Get into that grace and move forward and you will have an impact in the Kingdom of God.

They generally say, the cyclones or Hurricanes, over the Bay of Bengal is gaining momentum. By the time it arrives to the Kochi coast, its impact will be great. It started small but it turns and whirls and gains momentum.

Acts 2: When the Day of Pentecost had fully come, there was a sound of the mighty rushing wind.

In the Old Testament, people witnessed this but in the Day of Pentecost, the Lord released the FULL impact of the Holy Spirit on the church of Christ.

David says in Psalm 18:37- I have pursued my enemies and overtaken them; Neither did I turn back again till they were destroyed. I have wounded them, So that they could not rise; They have fallen under my feet.

Momentum can come into some families

Some families are gaining to gain positive momentum. God is going to release it upon some families by the Holy Spirit. Financial strength, influence, impact for the kingdom, increase for societal good. God is releasing a momentum upon your family.

Don’t be a stagnant water body, burst forth and move forward. God is releasing some of you into that grace,

2 Samuel 8:1- After this it came to pass that David [a]attacked the Philistines and subdued them. And David took [b]Metheg Ammah from the hand of the Philistines. 2 Then he defeated Moab. Forcing them down to the ground, he measured them off with a line. With two lines he measured off those to be put to death, and with one full line those to be kept alive. So the Moabites became David’s servants, and brought tribute. 3 David also defeated Hadadezer the son of Rehob, king of Zobah, as he went to recover his territory at the River Euphrates.

Verses 7-8-Then David put garrisons in Syria of Damascus; and the Syrians became David’s servants, and brought tribute. So, the Lord preserved David wherever he went. 7 And David took the shields of gold that had belonged to the servants of Hadadezer, and brought them to Jerusalem.

In everyplace you go to and whatever you set your hands to, God will bless. In every area, I am going to burst forth and God is giving me victory.

In Verse 11, David committed adultery with Bathsheba and murdered Uriah, her husband. That got him out of the momentum

Sin is a momentum killer.

All through your life, may the Holy Spirit give you momentum.

God is giving the church a spiritual momentum. He has given us land and a church, He has given us a YouTube channel but don’t sit there and settle down. We are going to move from victory to victory, glory to glory.

Isaiah 9:7 Of the increase of His government and peace There will be no end, Upon the throne of David and over His kingdom, To order it and establish it with judgment and justice From that time forward, even forever.

Of His government and increase, there shall be no end. Wherever Jesus is , is His headquarters. If Christ is in you, then every area of your life should only increase, and not end or diminish. In finances, health, peaceful family relationships, the work of your hands, all this will only increase.

If I were to give this sermon a sub title, I would have said, Why are you sinking?

Peter called out, ‘Lord, save me’. If God wants you to gain momentum, then why are you sinking?

A plane cannot take off without momentum. No matter how wonderful the engine is, it needs that runway to gain momentum. This year you are supposed to be taking off financially, spiritually, materially, in your careers, but why are you not taking off? Why are you are sinking?

Today is the last day that you will sink. Let that sinking nature be broken off. Lord, I want to take off again. Give me a thrust for your glory!

WHY ARE YOU SINKING?

Peter is the one who walked over the waters. Something very unlikely to happen. It is impossible, it is unusual. When we speak of momentum, it indicates that God has called us to do the unusual stuff! Let the church do usual and impossible things for God.

Nehemiah built the wall of Jerusalem in 55 days. Impossible, unusual! We would take 2 months to build the walls even around a small house! Can a young boy kill a mighty Goliath? Can Moses bring out and sustain 6 million Jews through the wilderness? But that is what God does for His people. Get ready for Supernatural encounters, supernatural spiritual momentum. How did the walls of Jericho fall down with a shout of praise during the 7th round. Impossible!

Lord bursting forth for your life and for you. Get ready for this!

Mathew 14: 30 But when he saw [a]that the wind was boisterous, he was afraid; and beginning to sink he cried out, saying, “Lord, save me!”

What is making Peter sink? He was supposed to walk on water. It was Jesus himself that had called him!

It was not the waves of the winds that caused him to sink. It is what you are looking at! As long as he as looking at the Lord he walked over the waters.

Your momentum is reversed when you turn away your eyes from the Lord. Your focus in the midst of the winds and the waves should still be on Jesus.

What you focus on determines the outcome

The greatest blessing that the Lord has given us is His presence.

It is the presence of God that guarantees victory. You have to be conscious of God’s presence.

Be mindful of Him. Look at who is with you. Just think about it. Despite having Jesus right in front, Peter began to sink. Many of us have Jesus with us, still we sink. It’s not because God has left you but because we are not mindful of His presence.

The house of Jacob from a people [a]of strange language,

And Israel His dominion.

What ails you, O sea, that you fled?

O Jordan, that you turned back?

7 Tremble, O earth, at the presence of the Lord,

At the presence of the God of Jacob,

God wants to take your forward, propel you forward and thrust you forward but that is when you keep the focus on Him.

Hebrews 13:5-6- et your conduct be without covetousness; be content with such things as you have. For He Himself has said, “I will never leave you nor forsake you.” 6 So we may boldly say: “The Lord is my helper; I will not fear. What can man do to me?”

1 john 4:4- 4 You are of God, little children, and have overcome them, because He who is in you is greater than he who is in the world.

Matthew 28:20- 20 teaching them to observe all things that I have commanded you; and lo, I am with you always, even to the end of the age.” [a]Amen.

Christ in you, with you, for you

If His Presence is with you, then you will

Focus on the Lord. Build a consciousness of His Presence. “I am aware…Jesus is with me”.

HOW DO YOU ACTIVATE THIS?

When you read the Word, even if you got only half of this sermon, there is something happening in you. Certain diseases are leaving your body.

your faithfulness to the clouds.

man and beast you save, O LORD.

7 How precious is your steadfast love, O God!

The children of mankind take refuge in the shadow of your wings.

Be mindful of His presence, be sensitive to Him. And that is what propels you to burst forth to gain momentum so that you don’t sink.