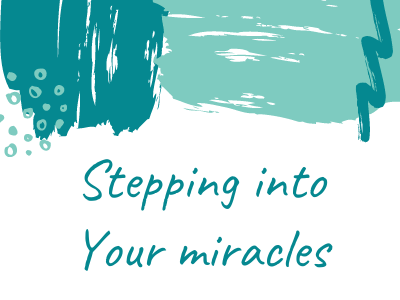 Step Into Your Miracles

Step Into Your Miracles

Ruth 1:19-21-19 Now the two of them went until they came to Bethlehem. And it happened, when they had come to Bethlehem, that all the city was excited because of them; and the women said, “Isthis Naomi?” 20 But she said to them, “Do not call me [a]Naomi; call me [b]Mara, for the Almighty has dealt very bitterly with me. 21 I went out full, and the LORD has brought me home again empty. Why do you call me Naomi, since the LORD has testified against me, and [c]the Almighty has afflicted me?”

Miracle means a surprising and a welcoming event that Is not explainable by natural or scientific laws.

John 14:14- Whatever you ask the Father in My name, it shall be given unto you.

The Principle of First Action: Sometimes for your miracle, you have to make your first move. It is called the PRINCIPLE of FIRST ACTION. You act and God reacts.

step of the prophet but just was he was told to do something, he got offended. The Word says he went out very angrily. Almost near to the fulfilment of the Promise but his emotions went hay wire.

Your emotions should never ever lead you away from your miracle.

Lord, do not allow me to turn away from the door because of my emotions I need my miracle!

When people who are supposed to rule, do not do so, that’s when famines occur. When you try to get your pastor out and have someone else play his role, famine hits the church.

Bethlehem means House of Bread. There was a man called Elimelech which meant Jehovah is King. His wife was Naomi, means pleasant one. If Jehovah is king, then there is pleasantness. If you are married to Him (have a relationship with him), then His pleasantness, beauty will come upon you.

What does it mean when you say God is my king? It means that your plans are secondary. First, it is God and His plans. It is all about God and not you.

AFTER PAUL HAD AN ENCOUNTER WITH GOD, HE HAD THREE REALIZATIONS:

Romans 1:14- 14 I am a debtor both to Greeks and to barbarians, both to wise and to unwise. 15 So, as much as is in me, I am ready to preach the gospel to you who are in Rome also. 16 For I am not ashamed of the gospel [a]of Christ, for it is the power of God to salvation for everyone who believes, for the Jew first and also for the Greek.

We look to where we are raised, our family, parents but we need to know that we are born with a mandate from God.

But what is your priority? What was I born to be? That is the way you need to prioritize your time.

Jehovah is KING, even in scarcity! Not just when you have everything and all is well! Even when it isn’t, he is King.

In every situation, what you see and what you say is very important.

This morning let the thoughts of backsliding be broken.

Sometimes your problem is not your condition but your location. It is said that 70% of your issues will be resolved if you are in the right place.

The battles of your life are determined by what you carry. There is a divine plan for your life. There is a seed of greatness inside of you.

Ruth 1:8- After a short while on the road, Naomi told her two daughters-in-law, “Go back. Go home and live with your mothers.

Mother is a model. Naomi says, ‘Go to the mother’s house’. Mothers gave birth to you. The church is called the Bride of Christ. We need to go back to the original plan and the church of God. God’s miracle over your life doesn’t work to take you back into Egypt but to take you to the Promised land.

Nobody follows a parked car!

Some people think that their life has come to an end. At the end there is always a bend when you say, “Lord I want only your purpose in my life”. Say this loud, “I am going somewhere”!

Our life should be evangelistic and it should not reduce the kingdom of God.

Naomi, you have faced losses, but still you are holding onto your faith and I see God’s pleasantness in your life. I should not reduce the kingdom of God. I will go with you---RUTH

DON’T STAY AT THE DOOR, MOVE INTO YOUR MIRACLE.